Here are the recall notifications I received from the CPSC over the last week. The information comes directly from the their official announcement. Please check your homes for the items and follow the directions provided to remedy.
Name of Product: SmartSpace(tm) Papasan Chairs
Hazard: The chairs were sold without a warning label instructing consumers to lo 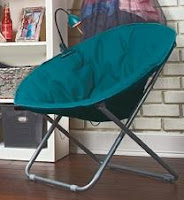 ck the chair’s legs before sitting. This poses a fall hazard to consumers.
Description: This recall involves the SmartSpace(tm) Papasan chair. The silver metal frame chair has a circular fabric seat that sits on a 10-inch-tall base. The fabric seat used with the papasan chairs were sold in purple, pacific, lime yellow and gray. A hangtag on the chair reads “Smartspace Papasan Chair – 1 piece.”
Sold at: Jo-Ann Fabric and Craft stores nationwide from June 2008 through September 2008 for about $25.
To see this recall on CPSC’s web site, including a picture of the recalled product, please go to: http://www.cpsc.gov/cpscpub/prerel/prhtml08/08406.html
Name of Product: Igloo Marine Elite Coolers

Hazard: Sharp edges on the stainless steel latch attached to the cooler can pose a laceration hazard to consumers.

Description: This recall involves Marine Elite coolers sold in white with stainless steel latches. The coolers were sold in four sizes: 72 quart, 94 quart, 128 quart and 162 quart.
Sold at: West Marine stores nationwide from January 2008 to July 2008 for between $80 and $375.
To see this recall on CPSC’s web site, including pictures of the recalled product, please go to: http://www.cpsc.gov/cpscpub/prerel/prhtml08/08407.html
Name of Product: TV Stands 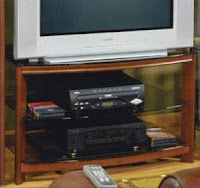 Hazard: The stability of the stands does not meet industry standards to prevent TV tip-over, posing a risk of injury or death to consumers. 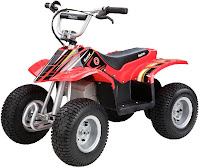 Hazard: The control module for the throttle can fail and cause the electric ride-on vehicle to unexpectedly surge forward, posing a risk of injury to the user or a bystander.

Description: This recall involves Razor® Dirt Quad electrically powered ride-on vehicles. Product ID numbers included in the recall begin with 103110-01 or 103110-02. The product ID numbers are located on the bar code affixed to the right step of the vehicle, on the charger and on the retail packaging. Product ID numbers beginning with 103110-03 or later are not included in this recall.
Sold by: Authorized dealers nationwide from August 2006 through September 2007 for about $400.
To see this release on CPSC’s web site, including pictures of the recalled product, please go to: http://www.cpsc.gov/cpscpub/prerel/prhtml08/08410.html
Name of Product: Razor® PowerWing(tm) Three-Wheeled Scooters 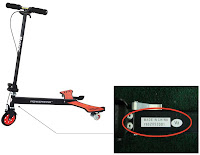 Hazard: The undersides of the foot platforms can have sharp edges, posing a laceration hazard to children.

Description: The PowerWing is a three-wheeled scooter, which was sold in either black or silver. The recall includes products with serial numbers beginning with:Y0708 Y0709 Y0710 Y0711 Y0712Y0801 Y0802 Y0803 Y0804 Y0805Y0806 Y0807 Y0808The serial number is located on the bottom of the scooter near the front wheel. Products with an oval sticker next to the serial number with a “V” followed by any letter (example VE, VF, VG, etc.) are not included in the recall.
Sold by: Authorized retailers nationwide and online from October 2007 through September 2008 for about $100.
To see this release on CPSC’s web site, including pictures of the recalled product, please go to: http://www.cpsc.gov/cpscpub/prerel/prhtml08/08409.html
Name of Product: General Electric Toasters 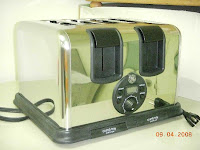 Hazard: An electrical short circuit can occur between the heating element and the bread cage, posing a fire and electrical shock hazard to consumers.
Description: The recalled toasters have a chrome steel body, a black plastic base and controls with either two or four openings in the top. The GE logo is located on the front of the toasters just above the controls. Model numbers 169115 and 169116 are included in this recall. The model number is printed on the bottom of the toasters.4-Slice: 1691152-Slice: 169116
Sold at: Wal-Mart Stores nationwide from September 2007 through July 2008 for between $17 and $28.
To see this recall on CPSC’s web site, including pictures of the recalled products, please go to: http://www.cpsc.gov/cpscpub/prerel/prhtml08/08413.html
Name of Product: “KVIBY” Chests

Hazard: The glass drawer knobs on the chest can break either during assembly or in use, posing a laceration hazard to consumers.
Description: The recalled KVIBY Chest is white with 4 drawers and 6 glass knobs. The recall includes chests with article number 201-080-90 and a date stamp of 0817 (first two digits indicate the year; the second two digits indicate the week) or earlier. The article number and date stamp are located on a label attached to the underside of the chest. KVIBY chests with a date stamp of 0818 and later have improved replacement knobs and screws and are not included in the recall.
Sold at: IKEA stores nationwide from August 2007 through July 2008 for about $300.
To see this recall on CPSC’s web site, including pictures of the recalled product, please go to: http://www.cpsc.gov/cpscpub/prerel/prhtml08/08414.html
Name of Product: Toy Boats

Hazard: The paint on the recalled toy boats contains an excess level of lead, violating the federal lead paint standard.
Description: This recall involves two models of tin Pop Pop toy boats. Models included in the recall are the 13-inch “Titanic” and the “Hut” Pop Pop boats.
Sold at: Buzz’s Boatyard’s Web site (http://www.buzzboats.com/) from April 2007 to November 2007 for between $3 and $12.
To see this recall on CPSC’s web site, including pictures of the recalled products, please go to: http://www.cpsc.gov/cpscpub/prerel/prhtml08/08415.html
Share:
Previous Article

Piece of the Week – The Challenge ...