I have received 10 recalls this week. Please review the items listed below.

The information comes directly from the email notifications from the CPSC.
1. Name of Product: Walther Air Cylinders for Air Pistols

Hazard: The cylinders can burst when in use and/or while being filled, posing a risk of serious injury to consumers.
Description: The recalled Walther air cylinders for air pistols are aluminum and involve model 2/WALTHER , 85 cm3, with the imprinted test date between 6 00 and 6 01 2000/2001 located on the end of the cylinder.
Sold by: Champion’s Choice store in La Vergne, Tennessee and International Shooters Service in Ft. Worth, Texas from 2000 through 2002 for about $47.
To see this recall on CPSC’s web site, including a picture of the cylinder labeling, please go to: http://www.cpsc.gov/cpscpub/prerel/prhtml08/08338.html
2.Name of Product: Dirt Devil Vacuum Power Brush Attachment Tools 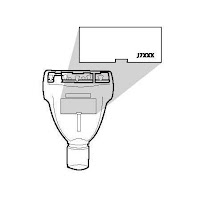 Hazard: Plastic pieces inside the vacuum tool can break apart and be ejected, posing a laceration hazard to consumers.
Description: The recalled Dirt Devil Turbo Tool/Power Brush attachment was sold as an accessory with the following Dirt Devil vacuum models. Only vacuum tool accessories with date codes J7060 through J7365 and have a C-clip connector are included in 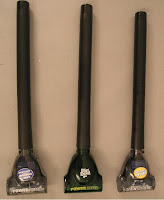 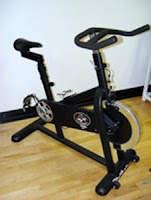 Hazard: The alloy cranks on the exercise cycles can break during use, posing a laceration and abrasion hazard to users.
Description: The Reebok Studio Cycle is an upright exercise bike used primarily in fitness centers and other institutional settings. The recalled bicycle is black with silver cranks. The unit has an internal belt drive. The base of the bicycle is a single piece that is welded to the frame. The legs are two straight horizontal bars with rounded edges. There is a logo located on the side of the exercise cycle that shows a person riding a bicycle.
Sold by: F.A.I. to health clubs and specialty fitness dealers nationwide from 1997 through 2000. The bicycles were not sold directly to consumers.
To see this recall on CPSC’s web site, including pictures of the recalled product, please go to: http://www.cpsc.gov/cpscpub/prerel/prhtml08/08340.html
4. Name of Product: “Sky Scrambler” and “The Sharper Image” Wireless Indoor 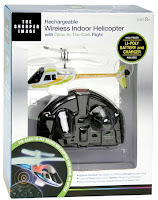 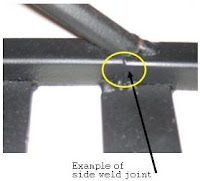 Hazard: The seat weld can fail and allow the chair to collapse, posing a fall hazard to consumers.
Description: This recall involves Santorini outdoor stacking chairs. The black metal chairs have vertical bars on the back and horizontal bars across the base.
Sold at: Cost Plus and World Market stores nationwide from January 2008 through April 2008 for about $50.
To see this recall on CPSC’s web site, including pictures of the recalled product, please go to: http://www.cpsc.gov/cpscpub/prerel/prhtml08/08342.html
6. Name of Product: Bright Starts Ring Rattles 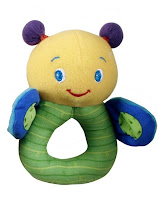 Hazard: The tip of the rattle’s antenna, which is attached to a bee figure, can detach and pose a choking hazard to small children.
Description: The soft toy rattle is a bee with a yellow head, ring-shaped green body, blue/green wings and purple/red antennas. Model number 8534 and date code PA8 are printed on a sewn-in label on the bee’s head.
Sold at: Toy stores, mass merchandisers, and other retail stores nationwide from January 2008 through June 2008 for about $2-3.
To see this recall on CPSC’s web site, including pictures of the recalled product, please go to: http://www.cpsc.gov/cpscpub/prerel/prhtml08/08343.html
7. Name of Product: Classic Horseshoe Magnet
Hazard: The plastic coating on the magnets contains excessive levels of lead, which violates the federal lead paint standard.

Description: This recall involves the Classic Horseshoe Magnets. The 6-inch tall horseshoe magnet has a red plastic coating on the “handle” end. Each “foot” of the magnet has an engraved “S” or and “N.”
Sold at: Specialty retail stores and educational supply distributors nationwide from March 2003 through April 2008 for about $10.
To see this recall on CPSC’s web site, including pictures of the recalled product, please go to: http://www.cpsc.gov/cpscpub/prerel/prhtml08/08344.html
8. Name of Product: U-shaped Magnets, Bar Magnets, Magnet Sets and Magnet Need 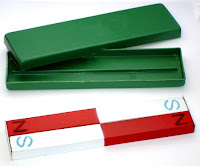 le Sets
Hazard: The paint on the magnets can contain excess levels of lead, violating the federal lead paint standard.

Description: Magnets included in the recall:

Hazard: The climbing lines can break, posing a serious fall hazard for 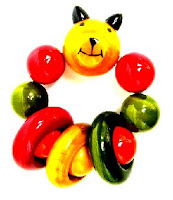 Hazard: The recalled toys contain small parts or can break into small parts, posing a choking hazard. The recalled rattles violate the federal rattle standard. Some of the toys also have a string longer than 12 inches, which can pose a strangulation hazard to young children.

including pictures of the recalled product, please go to: http://www.cpsc.gov/cpscpub/prer 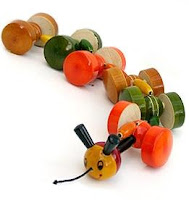 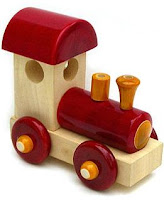 Tackle It Tuesday – The Cleaning Shelf