We had a star in our family. During our incredible trip aboard the Carnival Breeze we attended the Hasbro Game Show in the Ovation Theater. Modeled after the TV hit Family Game Night, participants play life sized games such as Simon, Sorry and Connect 4 to win prizes. 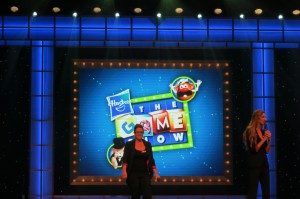 Butch, our wondeful Cruise Director, began the game by posing trivia questions to the audience. Hands flew up in the air as everyone wanted a chance to answer the question so they could participate in a round of the Game Show. My 6 year old was ecstatic. Her hand was waving like crazy with every questions Butch posed. I don’t even know if she knew the answer to any of them. All that mattered is that she sort of knew the answer (Daddy helped) to the the question that Butch finally called upon her to answer. She was so excited. So was I. 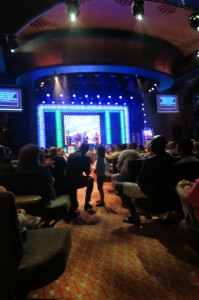 She stumbled on the answer, but in no time at all she was the captain of the Blue Team! It was so much fun. Her team had a blast playing Simon against the Red Team. The audience was so into it. I was a crazed mom taking a million pictures. (You know those moments when you have such excitement for your child. You just know that they are soooo happy. Well, that was that. She was beaming!) 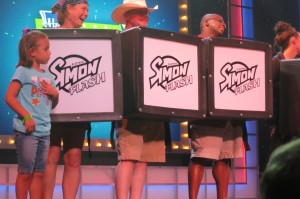 The Blue Team lost, but each player, including the world’s best team captain received a traveling game of Simon. She was a bit bummed about the loss but was truly just so happy about the entire experience. So was I!

I was invited on the cruise as part of a Press Trip. All opinions are strictly my own.