1.  The U.S. Consumer Product Safety Commission (CPSC), in cooperation with Sprout Stuff, of Austin, Texas, is announcing the recall 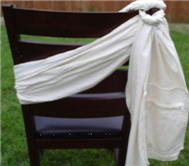 of about 40 Sprout Stuff infant ring slings. CPSC advises consumers to immediately stop using these slings due to a risk of suffocation to infants.

CPSC and Sprout Stuff are aware of one report of a death of a 10-day-old boy in the recalled sling in Round Rock, Texas in 2007.

The Sprout Stuff infant ring sling is fabric/natural muslin and comes with or without a shoulder pad. The sling is worn by parents and caregivers to carry a child up to two years of age. Sprout Stuff is printed on the back side of the tail’s hem.

Do not attempt to fix these carriers.

Hazard: An electrical failure in the dishwasher’s heating element can pose a serious fire hazard.
Description: The recall includes Maytag®, Amana®, Jenn-Air®, Admiral®, Magic Chef®, Performa by Maytag® and Crosley® brand dishwashers with plastic tubs and certain serial numbers. The affected dishwashers were manufactured with black, bisque, white, silver and stainless steel front panels. The brand name is printed on the front of the dishwasher. The model and serial numbers are printed on a label located inside the plastic tub on a tag near the left side of the door opening. Serial numbers will start or end with one of the following sequences.

Sold at: Department and appliance stores and by homebuilders nationwide from February 2006 through April 2010 for between $250 and $900.

To learn more about this recall: http://www.cpsc.gov/cpscpub/prerel/prhtml10/10255.html

Hazard: The mattresses fail to meet the federal mandatory open flame standard for mattresses, posing a fire hazard to consumers.
Description: This recall involves IKEA Sultan Heidal spring mattresses sold in sizes twin, full, queen and king. Mattresses included in this recall are date stamped 0725 through 1014 (YYWW). Sultan Heidal, supplier number and date stamp are located on a label attached to the mattress. Article and supplier numbers included in the recall are:

To learn more about this recall: http://www.cpsc.gov/cpscpub/prerel/prhtml10/10256.html

Hazard: The designs on the glasses contain cadmium. Long term exposure to cadmium can cause adverse health effects.
Description: The “Shrek Forever After 3D” collectable drinking glass are 16 ounce glasses that came in four designs, Shrek, Fiona, Puss n’ Boots, and Donkey.
Sold exclusively at: McDonald’s restaurants nationwide from May 2010 into June 2010 for about $2.

To learn more about this recall: http://www.cpsc.gov/cpscpub/prerel/prhtml10/10257.html

5.  Name of Product: “Pirates of the Caribbean” Twin Trundle Beds

Hazard: The headboard has a storage bin that poses an entrapment hazard to young children.
Description: This recall involves the Bayside youth bed: the Pirates of the Caribbean Twin Trundle Bed. The preassembled headboard has a brown wood base with decorative carvings, three open storage compartments, a storage bin and a mast. The storage bin located in the headboard, measures approximately 39 inches long, 6 1/2 inches wide and 24 inches deep. The “Pirates of the Caribbean” trademark is embossed on a metal plate inside the headboard. The name and address of the manufacturer, model number, manufacture date and “Made in China” is printed on a label affixed to the inside of the mattress frame side rails.
Sold exclusively at: Costco stores nationwide from January 2006 through January 2010 for between $700 and $1,400.

To learn more about this recall:  http://www.cpsc.gov/cpscpub/prerel/prhtml10/10258.html