At the Deering Seafood Festival earlier this year, I ordered Crawdads from The Golden Rule Seafood stand. I had no idea what it was. It sounded neat and I was in the adventurous mood. Then the plate arrived and this is what I had in front of me: 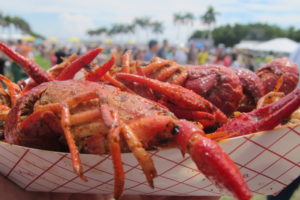 I wasn’t even sure where to start. How do I eat it? What parts shouldn’t I eat? My husband wasn’t there. I looked at my 5 year old and her look of disgust made me realize that she wasn’t about to help either. We stretched out our blanket and plopped down. I had a plate of conch fritters – yummy – and then the crawdads in front of me. I began to look around and see how others were eating them. They smelled delicious. I knew a generous amount of Old Bay Seasoning or something to that effect was covering them. I watched and learned. I took my first one and carefully pulled the meat out from the tail. It looked fantastic, very reminiscent of shrimp. I had a bite and was in heaven. The taste was fantastic with a flavor of seasonings and the ocean mixed together. Add in the fun of eating them, my picky 5 year old decided to try one. She “sort of” liked it. She thought it was too spicy. I thought they were perfect. 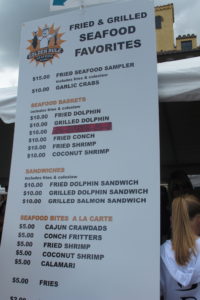 We enjoyed the next hour at the festival and then started to head to the car. I decided to stop by the stand one more time on the way out to pick up my “home with a cold” husband an order of the fabulous Crawdads. Look at the menu and see the one thing that had already been sold out. Guess what’s written behind the duct tape? Yes, Crawdads! Yes, I now fully understand why they would sell out!

I’ve searched around and asked some friends for a recipe on making these crawdads. Here’s the gist of what to do:

. Drop the live crawdads in and boil for a few minutes. Peel and eat. You can get fancy and boil potatoes, corn, sausage, all in the same water, like a crawfish boil.

Have you ever made them? Is there a different recipe I should try?

Keep It Simple, A Mom Must