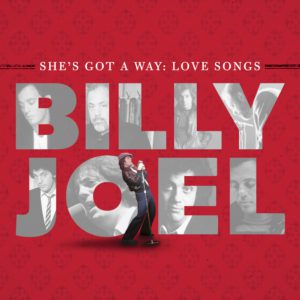 I have a special connection to Billy Joel. I hear his songs and I feel at home. Growing up on Long Island, Billy Joel is like a neighbor. The Billy Joel Greatest Hits

was my very first greatest hits CD. I could and still can recite every song by heart. Many of the songs hold special memories – especially from my high school days.

the collection has some of my very favorite favorites! What do you think? The song list is below. Which is your favorite?

Billy Joel love songs hold special meaning to many couples and with over 150 million records sold in his career, he has become a music legend. This CD is now part of my collection, consider making it part of yours. You can purchase the CD from Amazon She’s Got A Way: Love Songs

I complimentary CD was provided to Smarty Pants Mama Media, LLC. No commitment to review was made. All opinions are my own.