It was one of those days last week. Tired. Not much in the fridge. An un-seasoned pork roast was in the meat drawer. I had bought at a great price a few days before not once considering how I would cook it. What I did know, is that it was the only defrosted protein available for dinner that night. Had to cook it.

The veggie drawer didn’t offer much of a selection to use as ingredients. However, the kitchen counter produce bowl was holding a few onions and a sweet potato. My mind starting clicking. At this point I had a 2lb pork roast, 1 large onion and 1 medium sweet potato and about half a box of beef broth that I had opened a few days before. 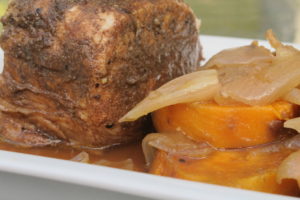 The ingredients were certainly reminding me of a pot roast I like to make – although sweet potato was different and I was out of soy sauce. I was now trying to figure out the seasoning. I have a HUGE assortment of seasonings. Matching which ones to use together is tough. Then I spotted a seasoning blend mix I had received the month before for review purposes. I figured, hey why not. No time like the present to try it out.

The Roasted Garlic Peppercorn flavor of Char Crust Seasoning was quickly opened. I sprinkled the mix generously over all sides of the roast. I sliced the onion and the sweet potato. I added it all into the medium pot, along with enough beef broth to get just to the top of the roast. I set it on high and let it get to a boil. I then covered it and lowered the heat to maintain a nice simmer. A little more than an hour later it was done. The smell in my home was fantastic.

I sliced the roast and set it on a nice platter, surrounded by the potato, onion & some of the broth. It was delicious. The seasoning was perfect.

Char Crust® four-ounce packages retail at $5.49, and can be found at butcher shops, gourmet food stores and grocery stores nationwide, and are sold online at www.charcrust.com. There are several flavors and can be used on anything from meat, to poultry, to seafood and vegetables. Super versatile. Let me know if you pick some up and what flavor you choose.

Do you ever have unexpected dinner surprises?

Disclosure: Complimentary packages of Char Crust® were provided. All opinions and recipes are my own! I appreciate moments like these, when I really have a “been there, done that” experience that can provide you with a true opinion on a product. I hope to share my next experience with you soon!

Our Memorable Juicy Route 27 in Florida