There’s no reason to reinvent the wheel! Marble Jar by WinWinApps came to the rescue last month when I had “had it up to here” with our morning routine.   It worked, with a few tweaks made along the way! (See below on How It Works Best For Me.) 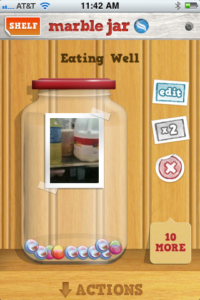 Now, the next challenge is dinnertime!  Help me now! Did you ever think a phone could be the missing component to successful kid dinners?  I sure didn’t.  We’ve all realized the motivational power a smart phone has with children.  I know I’m not alone threatening with, “If you continue this behavior, you cannot play on my iPhone for the rest of the day!”  It’s like taking away dessert for a week!

The challenge with dinnertime with my daughter is trifold.

I’ve decided to use the Marble Jar to track her success with all three during each dinner meal.  I also made her “reward” the opportunity to create the menu for one night…yes, she’ll get to pick out what we’re eating! With these three marble earning tasks, I made them measurable.  The 1st task requires her to finish her meal in less than 25 minutes.  The 2nd is to have a minimum of 3 bites of everything on her plate.  The 3rd, well that one is pretty self-explanatory!  Having measurable tasks makes it much easier to decide if she earned the marble or not.

It’s now been a little more than a week of our Dinnertime Marble Jar.  The jar is about ¼ full.  It isn’t as full as it should be partly because we/I forget to take out my phone during dinner.  Silly excuse but it’s true.  The “witching hour” can be pretty chaotic here and I’m often juggling feeding the infant too!  However, my daughter does remember.  “Look mom, I just ate three bites of the broccoli so I’ll get a marble!” is often mentioned at the table.  We’ve learned to add the marbles later.

How It Works Best For Me

Rather than taking out my phone immediately for each marble achievement, I am now starting to have the Marble Jar be part of our bedtime routine.  One of our favorite moments each night is to talk about our day.  As she recants her day at school, afternoon activities and how she ate her dinner, we together decide how many marbles she earned.  She then gets to tap them in!  I find that this works the best as taking the phone out for each moment of success isn’t always so feasible!

Our next jar is going to be a family jar.  We’ve recently went under a bit of a health kick in this house, trying to get out and exercise as often as possible.  I’m going to suggest that we make an exercise jar.  Each time a family member exercises for at least 20 minutes they get to put a marble in the jar.  I’m not sure what to have as the special prize when we fill up the jar.  I want it to relate to exercising and healthy living. Any suggestions?

Have you downloaded the Marble Jar app yet?  What do you think? I would love to hear how it’s working in your home!  Please share!

Disclosure: This is part of a compensated post series sponsored by Marble Jar.  All opinions are unbiased and my own.