Leadership Activity for Girls Inspired by Princess Elena of Avalor 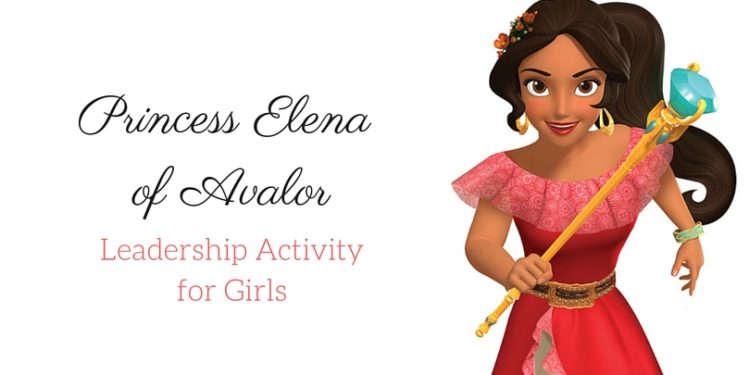 Look at your daughter. What do you see? Is she strong? Smart? Fearless? Is she willing to help others before herself? You are looking at a leader. Does she know that? As moms, we need to encourage our daughters to be leaders and to see it within them. We need to guide them to identify the characteristics of leaders and embody them. I have put together a leadership activity to assist you in bringing out the leader in your daughter. 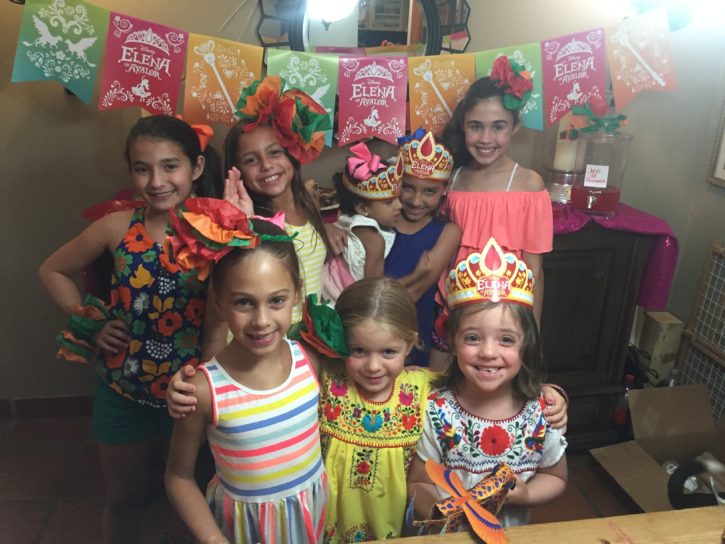 Read through my experience with my two daughters and learn how we were inspired by Disney’s first-ever Hispanic princess, Princess Elena of Avalor. We watched the premier with friends and family. The girls finished the showing wanting to be a princess like Elena.

There are female leaders around our community, country and planet. There are leaders on tv and the big screen, as well. What is a leader? Begin this activity by having that discussion with your daughter. Ask her to name females (age isn’t important) that she believes are leaders. She may need some help with this. Write the list out. Select one or two focus on for this activity. 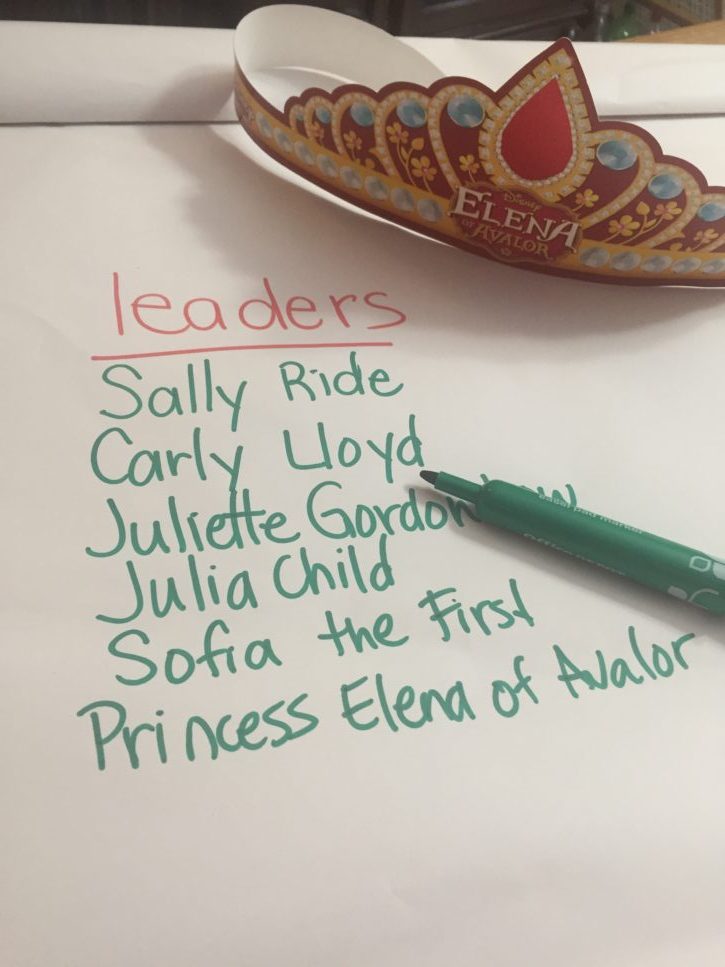 We selected Princess Elena of Avalor. It took them a little time to begin listing leaders. At first they believed only famous people were leaders. Our discussion was about the different types of leaders and how we find them in our own classrooms, soccer teams and even tv shows. That got the ball rolling. They couldn’t stop listing leaders then!

What makes these females leaders? Discuss what you know about each female. What’s her story? Place the leader’s name in the center of the paper. Make a web of the leader characteristics.

Princess Elena showed many leadership qualities in the show episodes we watched. The girls immediately said she was, “fearless” I couldn’t agree more. Over the next several minutes our brainstorm led to 8 characteristics of the Princess. 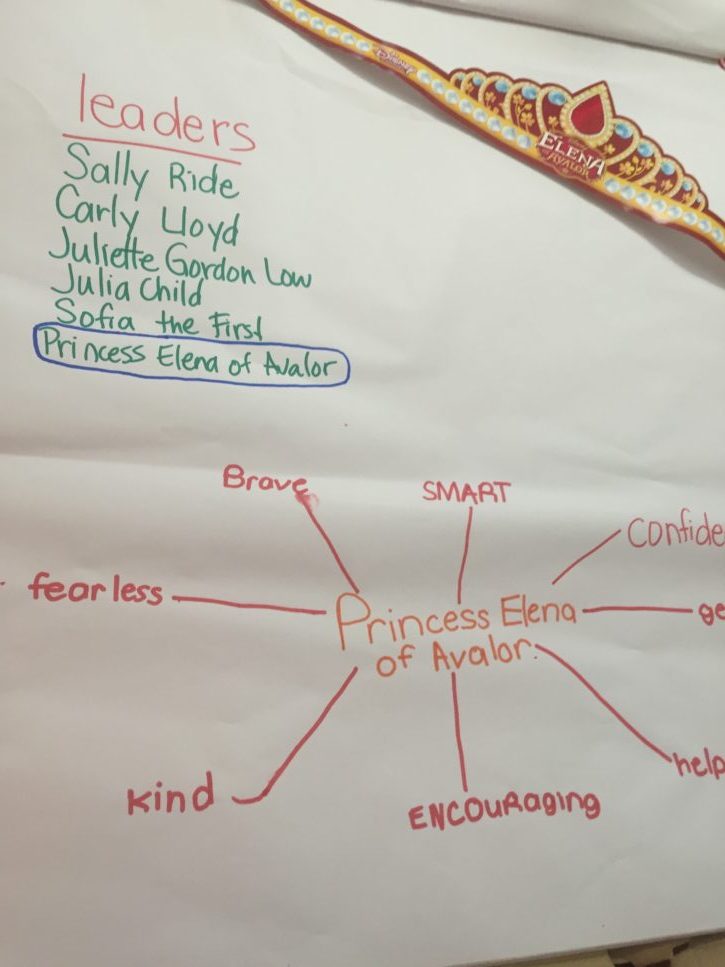 It’s often difficult to identify the good in oneself.  This conversation you have with your daughter is very important. Use the leadership web that you created with her identified leader as a springboard for the discussion. Often the child won’t recognize the good in her. Aren’t we so hard on ourselves, no matter the age? 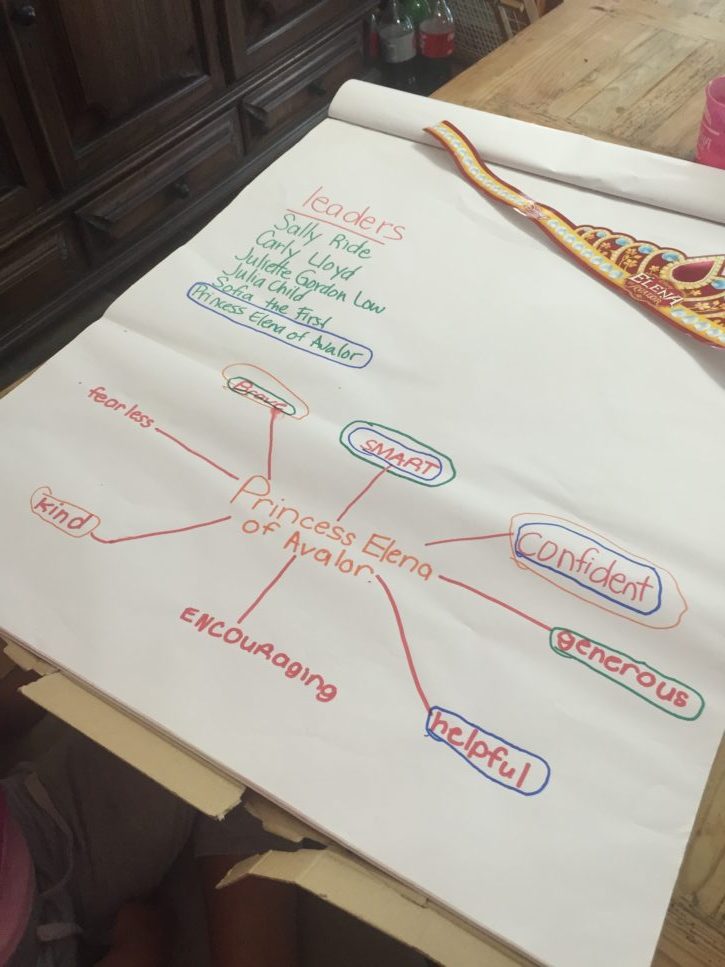 My older daughter was quick to say that Princess Elena was fearless. She shared that on the first episode Princess Elena showed her determination when she worked so hard to help her sister Isa and be there for the King who was visiting. They both had a hard time agreeing on which leadership traits they each embodied the best. It was hard as I believe they do embody all of these traits – just some more than others.

After discussing the characteristics of her favorite leader, work with her to see how she can embody more characteristics and/or those she already embodies, more deeply. My girls made a list of what they wanted to work on. Again, the discussion we had was critical. I didn’t want them to feel as if they weren’t one of the traits. My older daughter is very helpful. However, she now wants to be more helpful since she says that a leader is super helpful. The list is taped to the back of their door. 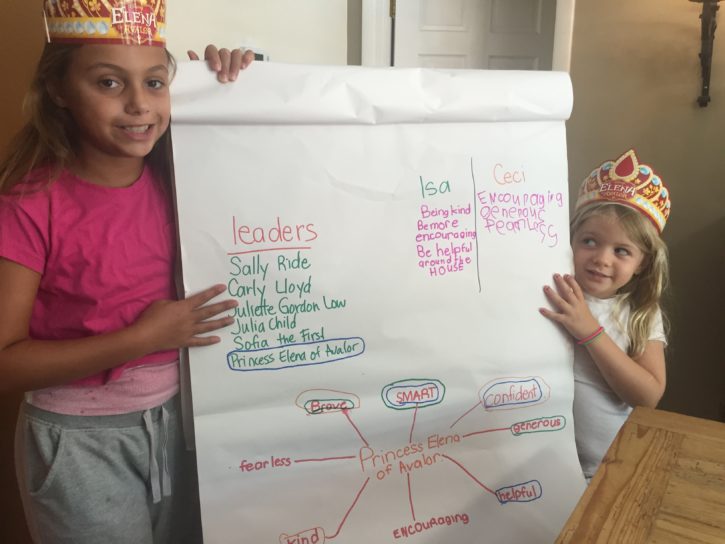 My two daughters are ready to continue being leaders and embody even more of Princess Elena of Avalor’s characteristics since our leadership activity. I hope to have inspired you to inspire your daughter, too!

Be sure to watch Elena of Avalor’s latest royal adventures! Elena of Avalor airs on the Disney Channel on Fridays at 7:30pm ET/6:30 pm CT and 7:30 pm PT!

You can also catch the excitement in our home as we prepared to watch the Elena of Avalor premier. Head over to the Smarty Pants Mama YouTube Channel to see it!