Friday night arrives and my daughter begs to stay up late. Her 7:30 PM school night bedtime is pushed to maybe 8:15. We would even let her stay up later but her eyes are typically half closed by 7:45. Our Friday nights consist of a family meal, often pizza, sometimes a movie and most commonly a game. The Murphy Family Game Night has really become a tradition. 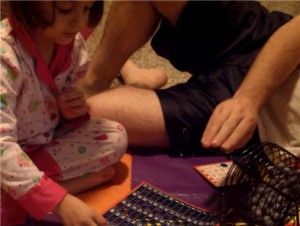 Family Game Night is a great tradition to start in your home. Learning strategy, sportsmanship, competition and game play, many board games tap into higher level thinking – regardless of your child’s age. It has become one of the immediate request I make to a family member or friend who asks what to get my older daughter for a gift. She loves board games. We love board games. We love to play them as a family.

This winter we’re going “American Idol” with our game night! Instead of a traditional board game, dice and game pawns, we’ve uploaded some favorite American Idol songs and other popular tunes onto our music player. Our unanimous family interest of the American Idol series has us pulling out of microphone and sing as if we’re on stage in Hollywood.

Our game consists of singing and dancing. My 5 year old loves to do both, while SmartyPantsDada and I rather dance silly with her. We play a song and take turns dancing, cheering each other on. I use a video camera to record our performances and then we playback the video clips together. It is honestly so much fun! My daughter LOVES to see herself on film. Using a video camera to record and playback the performances during Family Game Night brings the time together to a new level. We have a blast. If time and energy remain, we’ll end Family Game Night be watching a little American Idol from the DVR.

The MyCokeRewards.com/Family (MCR.com/Family) is full of fantastic ideas to tap into the kids and parents passion for American Idol when planning your Family Game Night! They include unique ways of incorporating the love for American Idol, including great yummy food pairings to make your “American Idol” Family Game Night a great success! Start the tradition is your home just as we have! As my 5 year old is being tucked in Friday night she’s already talking about what game we’ll play next week. It’s adorable!

To help kick-off Family Night, I would like to offer you a prize pack that you can offer to your readers as a special giveaway inspired by American Idol and the Fun for Family Night games on MCR.com. The prize pack is valued at over $100 and includes:
• (1) Handheld Camcorder
• (1) American Idol – The Hits Volume 1 CD
• (1) Coca-Cola and Pringles coupon

Disclosure: The prize was provided by Coca-Cola, but Coca-Cola is not a sponsor, administrator, or involved in any other way with this giveaway. All opinions expressed in the post are my own and not those of Coca-Cola.

COVERGIRL and Sofia Vergara Stunning Together at ...

Springtime Fashion Trends for the Kids