Black Beans and Rice, a Yummy Cuban Dish gets Bacon-ized!

Black beans and rice is one of the most served dishes in this house.  Whether its canned black beans or made from scratch, our tummies love it!

I am a 1st generation Cuban-American.  I was raised in a bilingual home with a ton of Cuban influence through food and tradition.  Our weeknight dinners were full of meals like bistec, picadillo and typically a serving of rice and black beans. 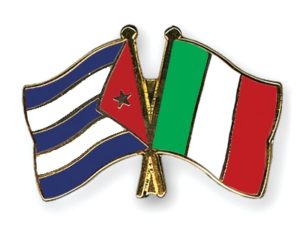 Fast forward a few decades and I am now responsible for the meals of my ½ Cuban-American home.  Tom is predominantly Italian with a little Irish thrown in!  In our home we enjoy Cuban, Italian and a few Irish meals!

There are a few “international” dishes that are certain to put smiles on all members of the family.  Black beans and rice is one.  It is one of the dishes, particularly the black beans, which my older daughter has always been fond of.

My favorite recipe can be found in Cocina al Minuto, a cookbook full of traditional Cuban dishes.  The cookbook is simple & to the point, without any fancy photos or illustrations. 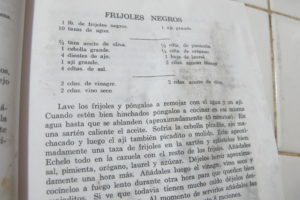 The black bean recipe is relatively easy, however, it calls on me to practice my Spanish as the book is written entirely in Spanish.  The cookbook is available on Amazon: Cocina al minuto / Cooking in a Minutes. 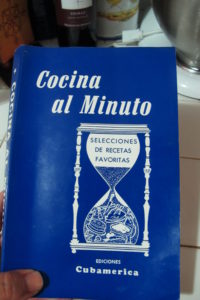 In my most recent black bean dish, I decided to kick it up a notch.  I wanted to add something a little different than the traditional recipe.  A quick look in my fridge revealed a package of yummy bacon, Hormel Black Label bacon at that!

Who doesn’t love bacon and how would it taste crumbled into the black beans?  We all love pork & beans, so how about if the beans are a little different as is the cut of “pork.” I thought about it for a few seconds and before you knew it I had the stovetop on cooking the bacon. 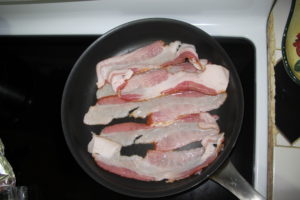 I made the recipe as stated in the cookbook, with the exception of cooking the onions, garlic and diced green pepper in the bacon fat!  (Yummy, but wouldn’t say healthy!) 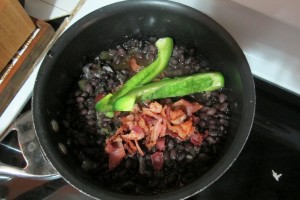 I added the crumbled bacon towards the end.

The bacon-ized black beans came out great!  They were delicious!  Next time I want to try it with an applewood  smoked bacon.  I think the smokey flavor of that bacon will be a great flavor to add!

Have you ever bacon-ized a dish?  Or simply added a new ingredient to a family favorite?  What did you add?  How did your family
react?  Can’t wait to hear!

Disclosure: I am currently a member of the Hormel Foods Extended BloggerProgram and this post is part of my involvement in the Group. While Hormel Foods provides me material and necessary resources to complete various activities, all statements and sentiments stated are my own.

eBay Lemonade Made by Tristan O’Brien – ...