Today’s post is brought to us by Amanda Dufau, a first-generation Cuban-American, was was born and raised in Miami. Her blog, 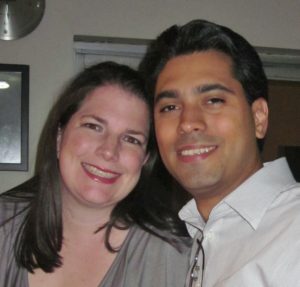 Brandon’s Puppy, chronicles life with her husband and two boys. She can also be reached via Twitter @MandersD22  I hope you are as inspired by her commitment to lead a healthier lifestyle! I am!

Last Spring, I took up running. I’ve never been a “runner”, but a friend coaxed me to go ahead and try it. He was so sure that I’d take to it, even like it, that he told me I’d end up running a Half Marathon with him. I figured I had nothing to lose, so I gave it a shot.

At first, I was gasping for air after two blocks. I thought to myself, “There’s no way I’m signing up for a Half”. I’d be out for about 4 minutes, and I’d alternate between running and walking every time the songs changed on my iPhone.  Before I knew it, I was at the point where I was running the length of four songs in a row, about 12 minutes. I immediately realized this equaled to about a mile, and was so proud of that achievement. 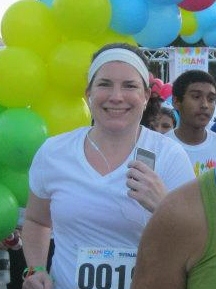 My sister is a runner, so I asked her what apps she recommended for my phone so I could keep better track of my progress. I also started signing up for races with her, and as the months passed, both my resistance and distance got better. I ran five 5Ks during the year, and last October I ran my first Half Marathon, something I never thought I’d do. I will be running my second Half Marathon with my friend in two weeks. (He was right!)

It has not been an easy road. I am very prone to laziness, so sometime I simply make up excuses as to why I’m not going running: it’s too cold, it’s too hot, I don’t want to go by myself, my favorite running clothes are dirty. But the same way there are excuses to not do something, there are reasons to do it. In my case, I feel better when I run. I like the way my muscles feel a bit sore the next day. I like knowing that I’m doing something good for my health and well-being, and it doesn’t require spending money on a gym membership or buying expensive equipment.

So many people include healthier habits and exercise as one of their new year’s resolutions. And most of those people end up breaking these resolutions because they push themselves too hard and get burnt out. I am no expert, but from experience I can tell you to take it step by step. Do something you enjoy, be it walking, running, biking, hiking, or swimming. As I mentioned, just one year ago I did not imagine I’d run half marathons, but in just a few short weeks I’ll have two under my belt. So my words of wisdom are these:

-Set short goals so that they do not seem so overwhelming. In the case of running, do an untimed walk/run first, then move up to a timed race, and the next time try to be your previous time (even if it’s just by a minute or two).

-Don’t be too hard on yourself if you don’t train as often as you’d like. Sometimes “life” happens and you really can’t set aside an hour or two to run (or walk, or go bike riding, or whatever your exercise goal is) every other day. Go when you can, something is better than nothing.

-Find a friend (or several friends) who will support and motivate you. I have a network of friends that run, and I know that they are there to encourage me if I feel that I’m not doing “good enough”.

– Whatever it is you do, do it for you. Do it because it’s good for you, and you love it. If you stop loving it, find something else that will make you feel just as good.