These are the Consumer Protection Safety Commission (CPSC) recalls that have been issued from August 25 –31, 2010.

In February 1996, CPSC issued guidelines (which were incorporated into an industry voluntary standard in 1997) to help prevent children from strangling or getting entangled in the neck and waist drawstrings in upper garments, such as jackets or sweatshirts.

Hazard: The elbow joint components on the wall mount’s arm do not fit together properly, causing the attached television to tilt and possibly fall when the television is adjusted. This could pose an injury hazard to a consumer.
Description: This recall involves the Sanus Vision Mount model LF228-B1 wall mounts and Simplicity model SLF2. The wall mounts were sold for flat screen televisions. The model numbers can be found on the UL sticker on the wall plate.
Sold at: The Sanus Vision Mount model LF228-B1 was sold through independent television mount dealers nationwide from June 2009 through July 2010 for about $450. The Simplicity model SLF2 was sold through Costco from June 2009 through July 2010 for about $200.

To learn more about this recall: http://www.cpsc.gov/cpscpub/prerel/prhtml10/10326.html

Hazard: The magnetic maze board’s plastic wand can separate and expose a magnet that can be a choking hazard to children. Also, if a child has more than one of these toys and the magnets detach and are swallowed, the magnets can attract each other and cause intestinal perforations or blockages, which can be fatal.
Description: This recall involves wooden magnetic maze boards. The wooden boards have a clear plastic sheet that covers small wooden or plastic pieces located inside a maze. A plastic wand containing a magnet in its tip is attached to the board by a cord. The wand is used to move items inside the maze. The top of the board reads: “Who’s Hiding in the Garden?,” “Who’s Hiding in the Ocean?,” “Magnetic Counting Maze,” “Magnetic Alphabet Board” or “My Community Magnetic Board.”
Sold by: Lakeshore Learning Materials stores nationwide, its catalogs and online at www.lakeshorelearning.com from January 2009 through May 2010 singly or in sets for between $30 and $40.

To learn more about this recall: http://www.cpsc.gov/cpscpub/prerel/prhtml10/10327.html 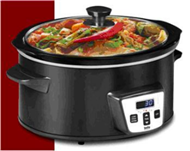 Hazard: The slow cooker’s control panel can overheat and melt, posing a fire hazard.
Description: This recall involves the Bella Kitchen 5-quart programmable slow cookers. Only slow cookers with model number WJ-5000DE and date codes 0907 or 0909 are included in this recall. The slow cookers are black and “Bella Kitchen” is marked on the control panel. The model number and the four-digit date code are printed on a label on the underside.
Sold exclusively at: Kohl’s Department stores from July 2009 through December 2009 for between $20 and $40.

To learn more about this recall: http://www.cpsc.gov/cpscpub/prerel/prhtml10/10328.html

Hazard: The TV stand’s neck support can break and cause the TV to tip-over, posing a risk of injury to the consumer.
Description: This recall involves Sharp 32-inch LCD-TVs with model number LC-32SB28UT. The model number, serial number and manufacture dates of March 2010 through April 2010, are printed on a label on the back of the unit. Serial numbers included in the recall are:

No other model or serial number is included in this recall.

To learn more about this recall: http://www.cpsc.gov/cpscpub/prerel/prhtml10/10329.html