Below are the CPSC recalls I have received over the past week. Note that a number of the recalls are with infant cribs. Please be sure to review the information provided. All information below comes directly from the listserve emails I received. Please see the CPSC website for further, more detailed information.

Hazard: The two battery terminals can come into con

tact with each other, causing the battery to overheat, posing a burn hazard to consumers.
Description: The recalled toy speed boats are lightweight plastic toy boats supported by an inflatable hull with “outboard” motors on them. The motor uses two AA batteries. The toy boat measures about 12 inches long by 8 inches wide and comes in various colors and designs.
Sold at: Dollar General nationwide from March 2008 through July 2008 for $3 each.
To see this recall on CPSC’s web site, including a picture of the recalled product, please go to: http://www.cpsc.gov/cpscpub/prerel/prhtml09/09012.html
Name of Product: BC-50 Battery
Hazard: The plastic portion of the unit’s power plug can crack or detach, posing an electrical shock hazard to consumers.
Description: The recalled BC-50 battery chargers were included with the Fujifilm FinePix F100fd digital cameras and are identified by the production lot codes “WCAA” and “WCAB”, which can be located on the back of the battery charger unit, in the lower, right-hand corner. The battery chargers were also sold separately as an optional accessory for the FinePix F100fd and F50fd digital cameras and have production lot codes of “WBAD” and “WFBA”. Battery chargers packaged with the Fujifilm Finepix F50d digital cameras are not included in the recall.
Sold at: Camera and photo supply retailers nationwide from March 2008 through September 2008 for about $60.
To see this recall on CPSC’s web site, including pictures of the recalled products, please go to: http://www.cpsc.gov/cpscpub/prerel/prhtml09/09013.html
Infant Death Prompts Recall of Convertible Cribs by Playkids USA; Crib Poses Entrapment and Suffocation Hazards
The U.S. Consumer Product Safety Commission (CPSC), in cooperation with Playkids U.S.A. of Brooklyn, N.Y. is announcing today a voluntary recall of about 2,000 convertible cribs. The sides of the convertible crib are made of a mesh that expands, creating a gap between the mattress a 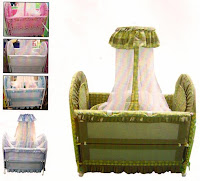 nd the side through which an infant can slip. This poses suffocation and entrapment hazards for young children.CPSC is aware of the death of a 5-month-old child on August 31, 2008 in Brooklyn, N.Y. The child became entrapped between the mattress and the drop side rail of the convertible crib and suffocated.This recall involves the Playkids U.S.A. convertible crib/playpen/bassinet/bed with model number PLK-909. “Playkids U.S.A.” can be found on the packaging and on a label sewn into the side of the crib. The model number can be found on the packaging. The convertible cribs have a drop side rail, a stationary side rail, a canopy assembly, and a bassinet. The sides of the convertible crib, the mattress support, the bassinet, the canopy and the bedskirt are covered in fabric and mesh. The fabric and the mesh come in a variety of colors and patterns.The convertible cribs, which were made in China, were sold in juvenile product retailers in New York from March 2007 through September 2008 for about $100.
To see this release on CPSC’s web site, including pictures of the recalled product, please go to: http://www.cpsc.gov/cpscpub/prerel/prhtml09/09015.html
Name of Product: Baby Walkers
Hazard: The walkers violate the baby walker voluntary standard and can fit through a standard doorway and are not designed to stop at the edge of a step. Babies using these walkers can be seriously injured or killed. 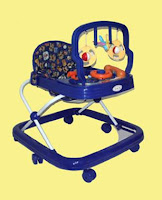 Sold at: Independent discount stores in Puerto Rico from November 2004 through March 2008 for between $18 and $25.
To see this release on CPSC’s web site, including pictures of the recalled product, please go to: http://www.cpsc.gov/cpscpub/prerel/prhtml09/09014.html
Infant Death Prompts Recall To Repair 600,000 Drop Side Cribs By Delta Enterprise; Spring Peg Failure Can Cause Entrapment and Suffocation Hazards
The U.S. Consumer Product Safety Commission (CPSC), in cooperation with Delta Enterprise Corp., of New York, N.Y., is announcing the voluntary recall today of about 600,000 drop side cribs. The crib’s drop side can detach when the spring peg is not engaged, which can cause an entrapment and suffocation risk to infants and toddlers.If the spring pegs in the base of each leg of the crib are pushed back into the lower track, the pegs can become nonfunctional. This can cause the drop side to detach from the crib and create a gap that can entrap an infant or toddler.CPSC staff is aware of a death of an 8-month-old child who suffocated when the drop side of his crib detached. CPSC is also aware of one child entrapment and on

e incident in which the drop side detached due to a disengaged spring peg.The recall involves all Delta drop side cribs manufactured prior to 2006 that use “Crib Trigger Lock with Spring Peg” drop side hardware design. The recalled model numbers and country of origin include: 4340, 4343, 4520, 4600, 4620, 4624, 4625, 4629, 4660, 4665, 4720, 4750, 4751, 4850, 4855, 4857, 4880, 4920, 4925-2, 4925-2B, 4925-6, 4980, and 8605. The model number, country of origin and manufacture dates are located on top of the mattress support board. The recalled cribs have Delta’s name and address on the mattress support boards and Delta’s logo on the teether rail.The cribs, which were made in China, were sold at major retailers nationwide from January 2000 through January 2007 for between $33 and $200. Cribs currently sold at retail are not involved.
To see this recall on CPSC’s web site, including pictures of the recalled product, please go to: http://www.cpsc.gov/cpscpub/prerel/prhtml09/09016.html
Infant Death Prompts Recall to Repair 985,000 Delta Enterprise Drop Side Cribs; Missing Safety Pegs Can Cause Entrapment and Suffocation Hazards
The U.S. Consumer Product Safety Commission (CPSC), in cooperation with Delta Enterprise Corp., of New York, New York., is announcing the voluntary recall to replace missing safety pegs involving 985,000 drop side cribs. Failure to use or install safety pegs can cause an entrapment and suffocation risk to infants and toddlers.When the safety pegs in the b