Happy Wednesday! I have received 8 recalls from the CPSC over the last week. Please review the information below that comes directly from the recall notification email.
Name of Product: Deda Forza Bicycle Handlebar Stems
Hazard: The top of the bicycle

handlebar stem can crack and cause the rider to lose control, posing a crash hazard.
Description: The recall involves bicycles with Deda Forza black carbon fiber handlebar stems in gloss finish. “Deda Forza” is printed on the handlebar stem. Deda Forza black carbon fiber handlebar stems in matte finish are not included in this recall.
Sold at: Bicycle retailers nationwide from January 2008 through June 2008 on bicycles selling for between $4,300 and $8,700. The handlebar stems were also sold separately for about $400.
To see this recall on CPSC’s web site, including a picture of the recalled product, please go to: http://www.cpsc.gov/cpscpub/prerel/prhtml08/08385.html
Name of Product: Circo Rosette Bobbie Socks
Hazard: The ribbon on the sock can detach, posing a choking hazard to young child 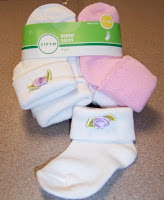 ren.
Description: The recall involves girls Circo bobbie socks. The socks were sold in packs of six (pink, purple, plain white and three pairs with a box), ranging in size from 6- to 12-months, 12- to 24-months and 2T to 5T. The socks are packaged in a green and white sleeve with a Circo-brand logo on the front.
Sold exclusively at: Target stores nationwide from January 2007 to July 2008 for about $6.
To see this recall on CPSC’s web site, including a picture of the recalled product, please go to: http://www.cpsc.gov/cpscpub/prerel/prhtml08/08386.html
Products: SlyDog Retractable Dog Leashes 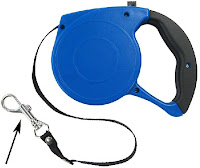 Hazard: The metal clasp connecting the leash to a dog’s collar can bend or break while in use, causing the leash to recoil back unexpectedly. This poses a serious risk of injury to consumers.
Description: This recall involves the SlyDog Retractable Dog Leash with a metal clasp. The leash has a handle composed of a blue plastic case with a black plastic grip. The leash is made of a black woven strap and measures approximately one-half inch wide. The end of the leash has a metal clasp which connects to the dog’s collar. The SlyDog retractable leashes with a plastic clasp are not included in this recall.
Sold by: Dollar General Stores nationwide from September 2007 through August 2008 for about $5.
To see this recall on CPSC’s web site, including a picture of the recalled product, please go to: http://www.cpsc.gov/cpscpub/prerel/prhtml08/08387.html
Name of Product: MasterForce 3.6-volt Cordless Screwdrivers

Hazard: The battery can overheat and ignite during charging, posing a fire and burn hazard to consumers. There is no protective device on the lithium battery to prevent overheating.
Description: The recalled cordless screwdrivers are green and gray in color. “MASTERFORCE” is printed on the top of the tool. “LITHIUM-ION TECHNOLOGY” and “241-0717” are printed on the handle.
Sold at: Menards stores from April 2007 through May 2008 for about $30.
To see this recall on CPSC’s web site, including a picture of the recalled product, please go to: http://www.cpsc.gov/cpscpub/prerel/prhtml08/08388.html
Name of Product: Action Baby Carriers

Hazard: The baby carrier’s chest strap can detach from the shoulder straps, posing a fall hazard to the baby.
Description: The recalled carriers were sold under the “Action Baby Carrier” brand name. The carriers are sold in various colors and patterns: blue, brown, green, “so square”, “the larrisa” and “spring breeze.”
Sold at: Specialty retail stores nationwide and Internet sites from May 2008 through June 2008 for between $80 and $90.
To see this recall on CPSC’s web site, including a picture of the recalled product, please go to: http://www.cpsc.gov/cpscpub/prerel/prhtml08/08389.html
Name of Product: Fairy Dust Pendants and Candle Charms
Hazard: The recalled metal pendants and charms contain high levels of lead. Lead is toxic if ingested by young children and can cause adverse health effects.Incidents/Injuries: None reported.
Description: The recalled pewter pendants were sold in a collection of 12 pendants. The pendants were sold separately and on candles of various colors and scents.
Sold at: Gift shops nationwide from February 2004 through February 2008 for between $6 and $8 for the pendants and between $12 and $15 for the charms with candles.
To see this recall on CPSC’s web site, including pictures of the recalled products, please go to: http://www.cpsc.gov/cpscpub/prerel/prhtml08/08390.html
Name of Product: Wolf Appliance Gas Ranges

Hazard: Delayed ignition of gas in the 18-inch oven can cause a flash of flames to be projected at a consumer when the range door is opened, posing a burn hazard to consumers.
Description: This recall involves the following Wolf Appliance 48-Inch gas ranges with model numbers: P48, PS48 and R48. The gas ranges are stainless steel with a double oven. A “Wolf” appliance logo is on the front of the larger oven door.
Sold at: Home builders and appliance stores nationwide from January 1998 through June 2008 for between $5,000 and $9,000.
To see this recall on CPSC’s web site, including a picture of the recalled product, please go to: http://www.cpsc.gov/cpscpub/prerel/prhtml08/08391.html 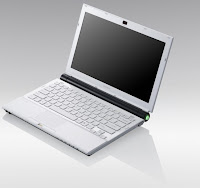 Hazard: Irregularly positioned wires near the computer’s hinge and/or a dislodged screw inside the hinge can cause a short circuit and overheating. This poses a burn hazard to consumers..
Description: The recalled notebook computer models are the VAIO VGN-TZ100 series, VGN-TZ200 series, VGN-TZ300 series and VGN-TZ2000 series. The computers’ screen size is about 11.1″ measured diagonally. Not all units are affected; consumers should contact Sony to determine if their unit is included in the recall.
Sold by: The SonyStyle stores and Web site, authorized electronics retailers, and authorized business-to-business dealers nationwide from July 2007 through August 2008 for between $1,700 and $4,000.
To see this recall on CPSC’s web site, including pictures of the recalled product, please go to: http://www.cpsc.gov/cpscpub/prerel/prhtml08/08392.html
Share:
Previous Article

Tackle It Tuesday – The Inventory Closet!

Piece of the Week – Mushroom Tray