Smart Mama’s: Please review the recalls the CPSC issued this week. The information below comes directly from the email I received from the CPSC. 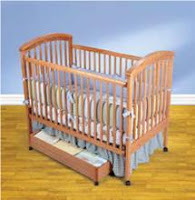 Side Cribs
Hazard: Due to sizing problems with the crib’s hardware, the drop side can come off the tracks. When the drop side detaches or partially detaches, it creates a hazardous gap, which can lead to infant entrapment and suffocation.

Description: This recall of Simplicity drop side cribs involves models that used a different style of hardware from those cribs recalled in September 2007. The recalled model numbers include: 8620, 8745, 8748, 8755, 8756, 8778, 8810, and 8994. The recalled drop side cribs have a date code, which can be found on a label on the headboard under the mattress support, which ends in 05DH, 05GB, 06DH, 06GB, 07DH or 07GB (examples: 1806 DH or 0507 GB). The recalled model names include: Aspen and Crib N Changer Combo, Gabrielle, Camille, Providence and Shenandoah. Only the brand name “Simplicity” can be seen on the label on the headboard.
Sold by: Department stores, children’s stores and mass merchandisers nationwide from January 2005 through August 2008 for between $150 and $300.
To see this recall on CPSC’s web site, including pictures of the recalled product, please go to: http://www.cpsc.gov/cpscpub/prerel/prhtml08/08401.html
Name of Product: Apeks Second Stage Scuba Regulators 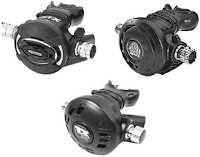 Hazard: These regulators can be missing the diaphragm cover which can cause the diaphragm to become displaced during a dive, allowing water to enter the scuba regulator. This poses a drowning hazard to divers.
Description: This recall involves Apeks TX, ATX, and XTX second stage regulators that have never been serviced. Apeks and TX, ATX, or XTX is printed on the regulator.
Sold at: Authorized Apeks dealers nationwide from February 2000 through June 2008 for between $420 and $1,450.
To see this recall on CPSC’s web site, including pictures of the recalled products, please go to: http://www.cpsc.gov/cpscpub/prerel/prhtml08/08402.html
Name of Product: “MYO” and “MYO Belt” Headlamps

Hazard: If the headlamp is used with rechargeable batteries, the cable connecting the battery pack to the lamp can spark, melt, or catch fire. This poses a burn hazard to consumers.
Description: This safety alert involves the “MYO” and “MYO Belt” headlamps with name and model numbers listed below. The “MYO” headlamps have a battery pack attached to the headband. The “MYO Belt” headlamps have a remote battery pack attached to the headlamp via a long electric cable.
Name Model Number
MYO E26P
MYO-black E26PN
MYO 3 E27P
MYO 3-black E27PN
MYO 5 E28P
MYO 5-black E28PN
MYO Belt 3 E29 P
MYO Belt 5 E30 P
MYOLITE E31 P
MYOLITE 3 E32 P
MYOBELT SB5 E33 P
MYO XP, blue E83 P
MYO XP, gray E83 P2
MYOBELT XP, blue E84 P
MYO XP BELT, gray E84 P2
The name of the product can be found on the side of the headlamp and on the packaging. The model number can be found on the packaging.
Sold at: Specialty retailers nationwide from February 2003 through August 2008 for between $40 and $80.
To see this recall on CPSC’s web site, including pictures of the recalled products, please go to: http://www.cpsc.gov/cpscpub/prerel/prhtml08/08403.html
Name of Products: Gotham Compact Fluorescent Downlights (Recessed Ceiling Lights)
Hazard: The relay on the backup battery of the lights could be 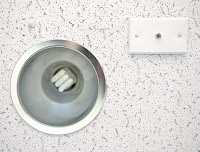 programmed incorrectly and prevent the lights from functioning in an emergency.
Description: Only Gotham Compact Fluorescent Downlights sold with the optional backup battery pack are included in the recall. The lights are recessed ceiling lights that were manufactured between November 1, 2007 and July 31, 2008.
Sold by: Electrical distributors and sales representatives nationwide from November 2007 through July 2008 for between $250 and $350.
To see this release on CPSC’s web site, including pictures of the recalled product, please go to: http://www.cpsc.gov/cpscpub/prerel/prhtml08/08405.html
Name of Product: Harry Potter Bookends 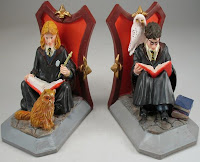 Hazard: The paint on the bookends contains excessive levels of lead, violating the federal lead paint standard.
Description: This recall involves poly-stone bookends painted and shaped in the characters of the Harry Potter book series. Bookend characters include Harry Potter, Hedwig and Hermione, and Crookshank.
Sold at: Elementary school fundraising programs, discount and dollar stores nationwide from June 2004 through January 2006 for between $3 and $28.
To see this release on CPSC’s web site, including pictures of the recalled product, please go to: http://www.cpsc.gov/cpscpub/prerel/prhtml08/08404.html
Share:
Previous Article

Tackle It Tuesday – The Bathroom Cabinet

Piece of the Week – Wipes Box