These are the CPSC recalls issued between May 12, – May 18, 2010. Remote-controlled helicopters, Step2 Push Buggies and toy dart gun from Family Dollar store are included.

You can find even more detailed information on all recalled products mentioned below on CPSC.gov.  All information below comes directly from the CPSC website. 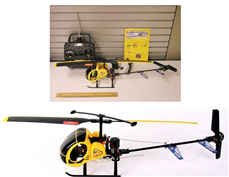 Hazard: The rechargeable battery inside the helicopters can overheat, igniting the helicopter and posing fire and burn hazards to consumers.
Description: This recall involves the “Fly Dragonfly” (also called “Queen Bee”) remote-controlled helicopters. The helicopters are black and yellow plastic, measure about 19 inches long by 6 ½ inches high. The helicopters have a rounded front yellow cockpit with bee decals and a narrow black plastic tail assembly. They were sold with a remote-control unit and a separate charger. “Fly Dragonfly” and SKU #51727 are printed on the packaging.
Sold at: Book/gift fairs held in schools, hospitals and office buildings nationwide from August 2009 through January 2010 for about $38.

To learn more about this recall: http://www.cpsc.gov/cpscpub/prerel/prhtml10/10228.html

Name of Product: Push Around and Whisper Ride Buggies 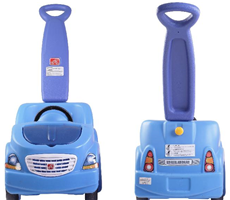 Hazard: A pin attaching to the yellow knob on the handle of the buggy can loosen, causing the handle to detach from the buggy. This poses a serious risk of injury to young children.
Description: The Step2® Push Around Buggy™ and Whisper Ride Buggy™ are ride-on toys. The buggy comes in various colors; such as, orange, red, blue, pink and green. The buggies have a red “Step2” logo on the handle of the buggy. Buggies that have a handle attached by a bolt with a plastic white or black head and nut are not included in this recall.
Sold at: Major retailers and specialty stores from August 1999 through March 2010 for between $29 and $59.

To learn more about this recall: http://www.cpsc.gov/cpscpub/prerel/prhtml10/10229.html

To learn about this recall: http://www.cpsc.gov/cpscpub/prerel/prhtml10/10230.html 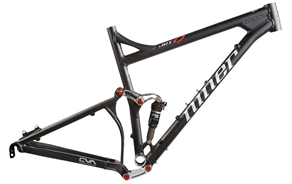 Hazard: A welding deficiency can cause the bicycle frames to crack along the welds of the front triangle of the bicycle. This can cause the rider to lose control and crash.
Description: The recalled bicycle frames include all Jet 9 models ranging sequentially from serial numbers P8001682 to P9400454. The frame is a full suspension model in the colors green, white or black. “Jet 9” and “Niner” are painted on the bicycle frame. The frame was made from 6000 series aluminum.
Sold at: Bicycle stores nationwide and overseas from March 2008 through September 2009 for $1,750.

To learn more about this recall: http://www.cpsc.gov/cpscpub/prerel/prhtml10/10231.html

Hazard: The hooded sweatshirts have a drawstring at the neck which can pose a strangulation hazard to children.
Description: This recall involves all children’s pullover and zippered hooded sweat shirts with drawstrings sold under the “Junk Food” brand name. These sweatshirts were sold in a variety of print designs and in children’s sizes small, medium, large and extra-large. The “Junk Food” logo is sewn into the neck of the garment.
Sold at: Department stores and retail outlets nationwide between June 2006 and August 2009 for about $35.

To learn more about this recall: http://www.cpsc.gov/cpscpub/prerel/prhtml10/10232.html

Hazard: The sweatshirts fail to meet federal flammability standards for wearing apparel, posing a risk of burn hazard to consumers.
Description: This recall involves Tommy Hilfiger brand children’s sweatshirts sold in sizes 4 to 16. The sweatshirts have the letters “N.Y.C.” and “Hilfiger College” printed on the front. Sweatshirts included in this recall were sold in three styles (descriptions online.)
Sold at: Tommy Hilfiger retail stores nationwide, Macy’s Herald Square (N.Y.) and at Tommy.com from August 2009 through January 2010 for between $50 and $70.

To learn more about this recall: http://www.cpsc.gov/cpscpub/prerel/prhtml10/10233.html 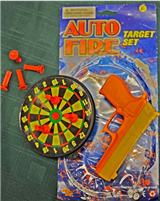 WASHINGTON, D.C. – The U.S. Consumer Product Safety Commission (CPSC), in cooperation with Family Dollar Stores Inc., of Charlotte, N.C., is announcing the voluntary recall of 1.8 million toy dart gun sets, due to an aspiration hazard. CPSC and Family Dollar have received reports of two asphyxiation deaths involving a 9-year-old boy in Chicago, Ill. and a 10-year-old boy in Milwaukee, Wis.

If a child places the soft, pliable plastic toy dart in his/her mouth, the toy can be inhaled into the throat and prevent the child from breathing.

The “Auto Fire” toy target set is sold with either an orange and yellow toy gun (item #P238) or a blue and yellow toy gun (item #9328), eight orange darts and a small target with numbers from 1 to 20. The gun’s item number is located on one side of the handle in raised lettering. The soft plastic darts measure just over one inch in length and have a small suction cup at one end with a diameter of about ½ inch. The target board is black, yellow, red and green, and measures five inches in diameter. “Gordy Toy” for “Ages 8+” is printed on the packaging.

The toy sets were sold exclusively at Family Dollar stores nationwide from September 2005 through January 2009 for about $1.50.

The products were manufactured in China.

Consumers should immediately take the toy target sets from children and discard them. Consumers can also return the guns and darts to a Family Dollar store for a full refund. For additional information, contact Family Dollar at (800) 547-0359 between 8 a.m. and 5 p.m. ET Monday through Friday, or visit the firm’s website at www.familydollar.com

For more information on this recall: http://www.cpsc.gov/cpscpub/prerel/prhtml10/10234.html 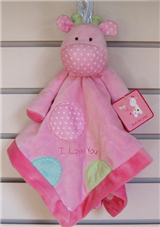 Hazard: The balls on top of the giraffe’s horns can detach, posing a choking hazard to young children.
Description: The recall involves the pink “I Love You” security blanket with a giraffe plush head. The blanket measures about 14 inches wide by 14 inches in length. “I Love You” is embroidered on the blanket. Style number Y22230H and “Just One Year a division of Carter’s” are sewn into a label on the blanket.
Sold exclusively at: Target stores from January 2009 through August 2009 for about $9.

To learn more about this recall: http://www.cpsc.gov/cpscpub/prerel/prhtml10/10235.html

Smart Product: 10 Steps to Mastering The ...

Smart Product: A Store that has Mom’s ...