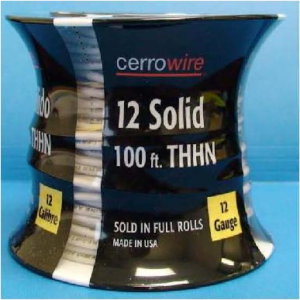 Hazard: The head of the sledge hammer can loosen and detach, posing a risk of impact injury to consumers.
Description: This recall involves Brigade sledge hammers with a hickory wood handle. There are 11 models included in this recall, ranging in size from 2 to 20 lbs. A green and white label with the word “Brigade” and the model name is affixed to the head of the sledge hammer, and “Genuine Hickory” is printed on the handle. Model and UPC information are printed on the label.

Sold at: White Cap Construction Supply distributors nationwide from April 2009 through May 2010 for between $12 and $47.
To learn more about this recall: http://www.cpsc.gov/cpscpub/prerel/prhtml10/10320.html 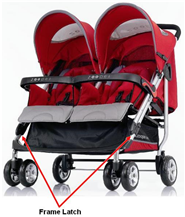 Hazard: The stroller’s frame latch above the front wheels can fail when the stroller hits an object, causing the stroller to unexpectedly collapse. This can result in minor scrapes, cuts and bruises.Description: This recall involves 2007 and 2008 Zooper Tango double strollers with a model number of SL808B and SL808F. The model numbers were printed on the original packaging. The strollers have production dates ranging from January 1, 2007, through April 30, 2008. The production dates are printed on the warning labels attached to the seats. The word “Zooper” is printed on the stroller canopies and grab bars. The Web address www.zooper.com is printed on the basket under the stroller seats.Sold at: Juvenile product and mass merchandise retailers nationwide and online retailers, including www.albeebaby.com and www.babiesrus.com, from January 2007 through August 2008 for between $400 and $430.
To learn more about this recall: http://www.cpsc.gov/cpscpub/prerel/prhtml10/10321.html

Hazard: The wooden frame of the chairs can break, posing a fall hazard to consumers.
Description: This recall includes wooden folding chairs. The chairs were sold individually and as part of a three-piece set that included one table and two chairs. “HD Outdoor” is printed on the chair’s packaging.
Sold at: Kroger, Fred Meyer, Ralph’s, Fry’s, Smith’s, Dillon’s, Gerbes, City Market, and Baker’s stores nationwide from February 2009 through December 2009 individually for about $50 and as part of the set that sold for about $130.
To learn more about this recall: http://www.cpsc.gov/cpscpub/prerel/prhtml10/10322.html 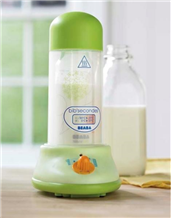 Hazard: The bottle warmers can overheat liquids and baby food, posing a burn hazard to adults and babies.
Description: This recall involves the Beaba Express Steam Bottle Warmer which uses steam to heat baby bottles or baby food. The bottle warmer is green with an orange temperature dial. “Beaba” is printed on the base and model number 9602 is printed on the underside of the warmer.
Sold at: Williams-Sonoma stores nationwide, online at www.williams-sonoma.com and through Williams-Sonoma catalogs from June 2010 through July 2010 for about $65.
To learn more about this recall: http://www.cpsc.gov/cpscpub/prerel/prhtml10/10323.html 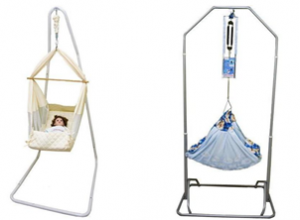 Incidents/Injuries: The firm has received three reports of the hammock becoming unbalanced, including one report of a two-month old who rolled to the side corner of the hammock and was found crying face down. No injuries have been reported.
Description: This recall includes MamaLittleHelper Hammocks with model numbers 1010, 1020 and BL222. They have a steel frame and a fabric hammock with a mattress which are connected by a large spring, safety rope and a metal hanger. Model BL222 has a computerized rocker device. “MamaLittleHelper” is printed on a label sewn onto the hammock models 1010 and 1020. Model BL222 does not have a label.
Sold exclusively: Online at www.mamalittlehelper.com from May 2008 through February 2010 for between $100 and $230.
To learn more about this recall: http://www.cpsc.gov/cpscpub/prerel/prhtml10/10324.html

Hazard: When the temperature setting is in “low,” the smoker’s hose/valve/regulator (HVR) assembly does not allow sufficient gas to flow, causing the flame to extinguish. Gas continues to flow and build up inside the smoker. If the smoker is reignited the build-up of propane gas can cause an explosion that bursts the smoker’s door open, posing an injury hazard.
Description: This recall involves the Char-Broil vertical gas smokers with model number 07701413. The model number is printed on a metal tag located on the right rear leg of the smoker. The smoker measures 21.5″ x 19.5″ x 45.5″ and weighs 75 pounds. A “G” inside a triangle is printed on the regulator (see photo).
Sold at: Walmart and various other retailers nationwide from March 2008 through June 2010 for about $140.
To learn more about this recall: http://www.cpsc.gov/cpscpub/prerel/prhtml10/10325.html